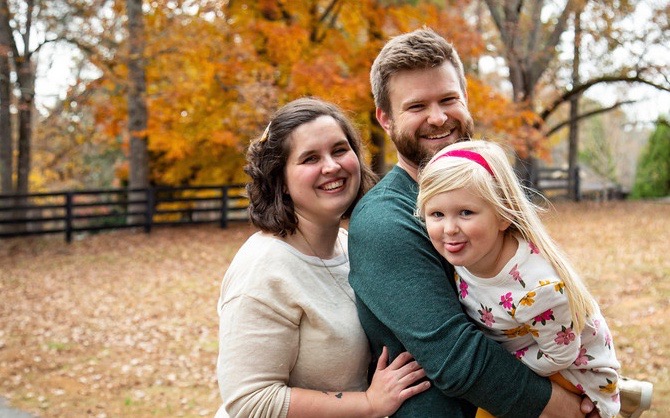 Leaving a legacy may not be a priority for some 30-somethings. But for Amanda Sutt and her husband Hugh Thompson, including the Community Foundation for Northeast Georgia in their will was a very deliberate decision, especially as parents of a four year old. They are passionate about building stronger communities, both now and in the future, and want to ensure that positive impact continues for generations to come.

“We don’t know what the future will hold but we do know that it’s good to be able to pass along funds that can help nonprofits,” said Amanda Sutt. “If we passed away sooner rather than later and our daughter Imogen didn’t know about the nonprofits [we supported] or about giving, this is a clue into something that was important to us – building a stronger community. It links her to our desires but it’s also us taking a stand. A stand that it’s important to pass our money along for generations to come.

“It’s not just about making sure we, or her, are taken care of, it’s also about helping take care of the people around us.”

As long-time Gwinnettians, Amanda and Hugh are familiar with many of our area’s nonprofits, especially through Amanda’s work as CEO and creative director at Rock Paper Scissors, a branding and marketing agency in Lawrenceville. In fact, Amanda has known about the Community Foundation since she was a teenager.

“My mom Cynthia Sutt, who founded Rock Paper Scissors, worked with Judy Waters, the Community Foundation’s previous executive director on a couple of early events. But I was a teenager so I didn’t pay much attention,” Amanda laughed. “The Community Foundation really didn’t come into my focus until the day Randy Redner called and asked us to help with some of their marketing needs. At that point, I was like a lot of people – I knew of the Community Foundation but not necessarily about what it offered or that you didn’t have to be a millionaire to give through it.”

The more Amanda learned about the Community Foundation, the more she realized the larger impact it was having.

“The Community Foundation is not just supporting nonprofits with funds but they’re also working to make those organizations stronger and better and build connections to donors. I think their tagline ‘Connecting people who care with causes that matter” has been embraced on such a deeper level’,” she said.

Over the years, Amanda has become the go-to person in her peer group when it comes to giving.

“They know I’m connected to a lot of nonprofits,” she said. “Many of them want to start giving but they get overwhelmed trying to decide where – especially if it’s the last five days of the year.”

So when peers ask where to give – she has an answer ready.

“I almost always answer, if you don’t have something you’re passionate about, give to the general fund at the Community Foundation,” Amanda said.

“I think one of the biggest advantages of the Community Foundation is that they know where the biggest needs are and can use your money to address those needs. Being able to delegate that decision [to give] and know it’s going to the biggest need is a big plus.”

For Hugh, he sees it as giving more intentionally.

“Sometimes we’re called to give money in a very reactionary way, like after a disaster, which is important, but the channels through which the money is connected can feel like a black hole,” he said. “But if you’re interested in helping locally, giving to the Community Foundation means you know where the money is going and how it’s helping.”

“I think infrastructure is very cool and important – nobody thinks it’s sexy but it’s so critical to a healthy community,” she said. “And I think that’s where we’re seeing a big difference in Gwinnett during the COVID-19 crisis, and with the Community Foundation right now, because we have a very strong infrastructure. Other communities who don’t have as strong of an infrastructure are hurting more than we are.

“That’s really a core of my motivation to include the Community Foundation in our will – to help empower people to build a better world. And ensure that our money will have a more profound impact.”