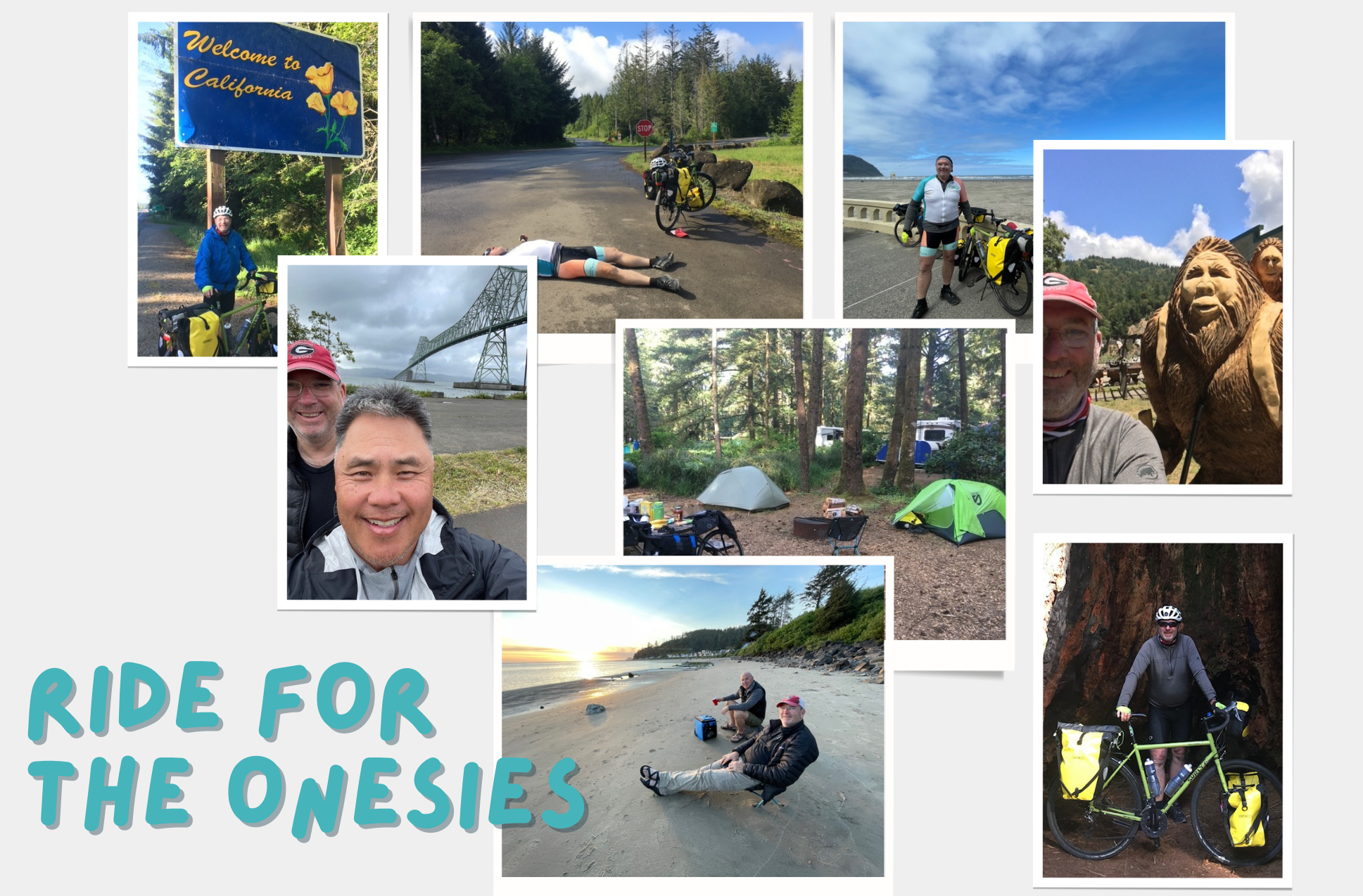 On May 22, 2021, John Upchurch, a fundholder and board member at the Community Foundation, embarked on a challenging assignment along with fellow cyclist David Kim. Bike from the Canadian border in Anacortes, Washington to San Francisco, California. One of the big reasons behind this journey? To support the early learning Initiative Building Babies’ Brains’ newborn onesie program, which introduces parents to the importance of early learning while they’re still at the hospital with their newborn.

“In the last few years as I began to transition away from an 80+ hour work week I found myself with a lot of time. The daily grind of running a small business in our industry was very hands-on and required much planning and execution. I guess I was looking for that ‘high’ in my semi-retired life. I climbed Mount Kilimanjaro in 2019 and loved that feeling of accomplishment,” John said. “I had a bike ride in mind and then realized it would be a great platform for Building Babies’ Brains as well.”

John, who is a founding member of the early learning initiative that launched out of the Community Foundation, has been part of the Building Babies’ Brains initiative from day one. It was there he met David Kim.

“When I was working on building the Great Little Minds book exchanges, he jumped right in and helped. I met with him and Jin Lee at Catalyst Coalition as they launched their nonprofit. We struck up a friendship and he was also a cyclist so it was an easy partnership for us to do this trip together,” John said. “He had been a minimalist camper in his life so he was full of information and experience. Having him along made the ride much more fun and enjoyable.”

Knowing he had a new purpose for his ride, John jumped into action. He consulted with Rock Paper Scissors, a Lawrenceville branding and marketing agency, who donated a logo design and website update so people could donate to the Building Babies Brains onesie initiative. Donations ran through the Gwinnett County Public Schools Foundation and Kim Holland, Director of Early Learning and School Readiness for GCPS, and GCPS teacher Stacie Lord kept supporters updated through posting about the “Riding for the Onesies” ride as John rarely had phone signals.

“We decided to make the hospital onesies as our cause since it is not in any of our grants we have recently received. Getting in front of these parents as soon as possible is very important to the success of our initiative,” John said. “We have about 9,000 babies born at our two hospitals a year.  The package to deliver the onesies to the parent is about $7 each. We were able to raise over $3,000 toward that effort, which will help us get a jumpstart on the project.”

John and David rode 40-55 miles per day and encountered numerous highs and lows.

“ I loved the Oregon Coast  but the best part was the Avenue of the Giants in the Redwood Forest. Sleeping and riding among the 2,000 year old trees was so peaceful and tranquil. I got up early one morning and rode for 1.5 hours without seeing a car. It was beautiful,” John said.

“The most challenging? Definitely the hills. I think we lost and gained 54,000 feet in elevation. We were ready for the challenge and took our time on the hills. We were not in a race so we were able to stop and rest when needed. Sleeping on the ground for 20+ days was a challenge for this 60-year-old body. I eventually got used to it but it was tough at the beginning. We were very lucky to have great weather except for one day of rain.”

John also met some like-minded people along the way.

“The people I met on this trip were amazing,” he said. “Everyone was so nice and helpful. They wanted to know our story and what we were doing. We even met some early learning advocates at the campsites. Some worked in the nonprofit world and some were teachers.

For John, and everyone working on Building Babies’ Brains, it’s been a labor of love.

“We launched this initiative less than a year ago to the general public and have already accomplished so much in a year,” he said. “We welcome anybody to the table who believes in our mission. The best is yet to come!”